Home Politics Biden: Pathway To Citizenship In Reconciliation Package ‘Remains To Be Seen’ 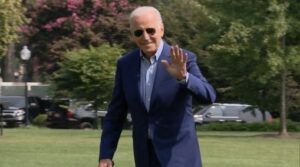 President Biden on Sunday said it “remains to be seen” if a pathway to citizenship will be included in the Democrats’ forthcoming reconciliation package.

Biden, upon arriving back at the White House over the weekend, answered a question about whether a pathway to citizenship needs to be in the reconciliation bill, telling reporters that “there needs to be a pathway for citizenship; whether it can be in immigration remains to be seen,” according to a pool report.

The pool reporter noted that Biden appeared to mean the reconciliation package, not an immigration bill.

Democrats last week announced that they reached a deal on a $3.5 trillion price tag for a Democratic-only infrastructure package. The party is aiming to pass the bill as a budget resolution, which would authorize reconciliation and allow Democrats to bypass a GOP filibuster through a simple majority vote.

The reconciliation package has been touted as the second part of Biden’s infrastructure agenda, which would focus on “human infrastructure,” including investments in long-term care for seniors and people with disabilities. It is part of the president’s wide-ranging families and jobs plan.

The first part of Biden’s infrastructure initiative is a bipartisan infrastructure framework, crafted by the president and a group of Capitol Hill negotiators from both parties, which focuses more on core physical infrastructure, including funding for roads and bridges.

Democrats, however, are now turning some of their attention to long-stalled immigration reform after a federal judge blocked new Deferred Action for Childhood Arrivals (DACA) applicants.

With the bipartisan talks largely stalling, some in the party are looking at trying to include immigration reform in the sweeping reconciliation package, particularly a pathway to citizenship for at least “Dreamers,” immigrants who were brought into the country illegally as children.

By Mychael Schnell for THE HILL
Read Full Article HERE