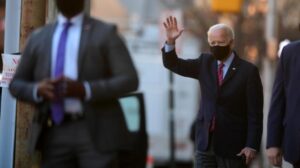 President-Elect Joe Biden on Tuesday laid out his top priorities for his first 100 days in office while tempering expectations about just how much of his ambitious agenda can be accomplished with a likely Republican majority in the Senate.

Asked during an NBC Nightly News interview by host Lester Holt what he would try to accomplish in his first 100 days, Biden stated he would send an immigration bill to the Senate that “provides a pathway to citizenship for over 11 million undocumented people.”

Biden also said he would roll back Trump’s actions and executive orders on the environment, which has included reversing more than 100 environmental rules including the Clean Air Act and the Clean Water Act.

Finally, Biden echoed his support for a key component of Democrats’ coronavirus relief bill, the HEROES Act: funding for state and local governments facing major revenue shortfalls and resorting to brutal budget cuts due to the coronavirus pandemic.

“It’s all gonna depend on the cooperation I can and cannot get from the US Congress,” Biden conceded, a warranted concern given recent failures to pass immigration reform in the Senate and Senate Majority Leader Mitch McConnell’s dismissal of state and local funding as a “blue state bailout.”

Biden signaled an investigation into Trump is low on his list of priorities despite demand from some Democrats, telling Holt, “I will not do what this president does and use the Justice Department as my vehicle to insist that something happen.”

The transition got fully underway on Tuesday after General Services Administration head Emily Murphy authorized it on Monday. A Biden transition official told Forbes they have begun interfacing with all federal agencies, while two White House officials said Biden has begun receiving the President’s daily brief, a top-secret intelligence document. Biden told Holt Trump administration officials have been “sincere” and not “begrudging” in their outreach.