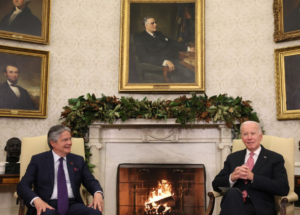 The Biden administration is required this week to lift Title 42, a public health order first issued under former President Donald Trump that allows U.S. Customs and Border Protection to rapidly expel migrants to Mexico or back to their home countries to prevent the spread of the COVID-19 virus in U.S. holding facilities.

Lifting the order, as required by a judge who said it was “arbitrary and capricious” and violated federal regulatory law, could lead to thousands of asylum-seeking migrants being released in border state communities and a greater influx of migrants to the U.S.-Mexico border.

Biden and Lasso sat beside each other in the Oval Office to begin their discussions.

“Today we’re going to keep building on the progress we’ve made. Together we’ve made historic strides on migration,” Biden told reporters.

Lasso said he and Biden would affirm democratic values of liberty and respect for human rights. After the meeting, he told reporters that migration did come up in their talks.

“We have talked about migration and migration as a consequence of the economic problems of many countries in Latin America. We have ratified our commitment to continue supporting, as we have done, the migration phenomenon, especially (migrants) from Venezuela in Ecuador,” he said.

U.S. lawmakers, both Republicans and Democrats, on Sunday pressed Biden to take action to manage an expected wave of asylum seekers at America’s southern border.

U.S. Senator Joe Manchin, a conservative Democrat, appearing on the CBS News “Face the Nation” program on Sunday, urged Biden to ask for an extension of Title 42.