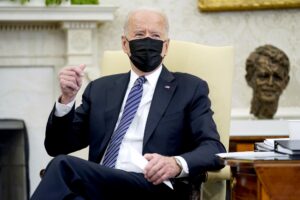 President Joe Biden plans to welcome six recipients of the Deferred Action for Childhood Arrivals program to the Oval Office on Friday as his administration signals his immigration reform plan remains a legislative priority.

In his address to a joint session of Congress last month, Biden called on lawmakers to “end our exhausting war over immigration.” While pushing his plan to extend citizenship to more than 11 million undocumented immigrants, he also said Congress could act to secure protections for “Dreamers,” beneficiaries of the Obama-era DACA program, which enabled undocumented immigrants who came to the United States as children to remain in the country.

The individuals Biden will meet Friday underscore the administration’s argument for enshrining that executive action into law, highlighting essential workers in fields like education, agriculture and health care.

Maria Praeli came to the United States from Peru as a 5-year old when her sister sought medical treatment after a car accident, and now works for FWD.us, an immigration advocacy group. Astou Thiane, born in Senegal, grew up in New York, joined Teach for America, and continues to advocate for supporting undocumented students’ educations.

Esmeralda Tovar-Mora was just 18 months old when she came to Kansas from Mexico and is now pursuing a nursing degree. She married a National Guard member and is raising a 3-year-old daughter, a U.S. citizen.

Leydy Rangel, who now works for the United Farm Workers, is the daughter of migrant workers in California.

Jirayut “New” Latthivongskorn, who came to the U.S. from Thailand at the age of 9, was a plaintiff in California’s case against the Trump administration that led the Supreme Court to uphold DACA protections.

And Karen Reyes, who came from Mexico with her mother as a 2-year-old, is now a deaf education specialist working with Kindergarteners.