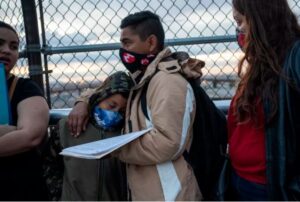 Migrants arriving on the border will no longer be sent back to Mexico to await hearings.

The Biden administration announced that starting Thursday, it will no longer enroll asylum seekers newly arriving on the southern border in a Trump-era program that has forced tens of thousands to wait in Mexico for a chance to obtain protection in the United States.

The Homeland Security Department urged anyone currently enrolled in the program, known as the Migrant Protection Protocols (MPP) or colloquially as the “Remain in Mexico” policy, to “remain where they are, pending further official information from U.S. government officials.”

The agency also advised that migrants now en route to the US will not be eligible for a path to citizenship under the ambitious immigration reform proposal that Biden sent to Congress earlier in the day — an apparent attempt to dissuade them from rushing to the border. (Only those present in the US on January 1, 2021, would be eligible.)

More than 67,000 migrants are currently enrolled or were previously subject to the program, a number of whom continue to wait in encampments along the US-Mexico border to be called in for their court dates in the US. Before the pandemic, asylum seekers would often have to wait months for a hearing. But in March, the Trump administration suspended all their hearings indefinitely on account of the Covid-19 pandemic.

Wednesday’s announcement, which came alongside a flurry of immigration-related executive orders and the bill sent to Congress, is a signal that the Biden administration is rapidly seeking to undo the Trump administration’s restrictionist policies on the border. The Remain in Mexico program was one of many interlocking policies that, together, made obtaining asylum and other humanitarian protections next to impossible.