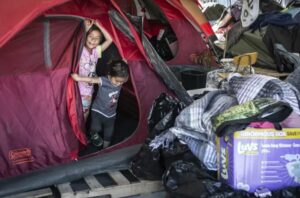 The Biden administration’s plan will start slowly at three ports of entry and target those who were forced into Trump’s controversial “Remain in Mexico” program.

Immigrants who were forced by former president Donald Trump to wait in dangerous conditions in Mexico while they tried to gain asylum will soon start being allowed to enter the US at certain ports as the Biden administration attempts to wind down the controversial policy, according to documents obtained by BuzzFeed News.

The unprecedented effort, which is expected to be rolled out within the next two weeks, is the beginning of President Joe Biden’s promise to end the Trump administration’s “Remain in Mexico” policy — formally known as the Migration Protection Protocols (MPP). The policy led to tens of thousands of asylum-seekers being forced to stay in Mexico as they waited for their day in a US court. Often left with nowhere to go but squalid camps in Mexican border towns, human rights advocates reported cases of the immigrants being kidnapped, raped, and tortured.

The Biden administration’s plan, which will start slowly at three ports of entry, targets those who were pushed into the Remain in Mexico program and still have active cases in US immigration courts, according to a draft of the plan obtained by BuzzFeed News. Those who qualify after registering online should not come to the border, but instead wait for instructions to start the entry process, a source with knowledge of the plan said.

As they prepare to enter the US, the immigrants will be kept in so-called staging areas in Mexico, where they will receive a medical screening and a COVID-19 test. Those who test positive for the disease will be forced to continue waiting in Mexico until they test negative.

US Customs and Border Protection officials will also assess the capacity to intake those allowed into the US on a daily basis. Officials believe they can process up to 300 people a day within the first few weeks at two of the ports of entry for the initial phase.