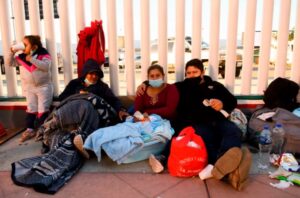 Border officials are slowly working up to processing 300 migrants daily.

The Biden administration has begun allowing tens of thousands of asylum seekers who were forced to wait in Mexico for a chance to obtain protection in the United States under a Trump-era program to cross the border.

Some 28,000 asylum seekers — primarily Cubans, Hondurans, and Guatemalans — have active cases in former President Donald Trump’s Migrant Protection Protocols (MPP), which became known as the “Remain in Mexico” program. It is one of many interlocking Trump-era policies that, together, have made obtaining asylum and other humanitarian protections in the US next to impossible.

On Friday, the Homeland Security Department announced that it had allowed 25 of those asylum seekers to cross the US-Mexico border at the San Ysidro port of entry, which connects the city of Tijuana with San Diego, California. International organizations, including the United Nations Refugee Agency (UNHCR), had registered the asylum seekers in advance and given them an appointment to show up at the border during which they verified their eligibility to enter the country on a US Customs and Border Protection mobile app and tested negative for Covid-19.

“Today, we took the first step to start safely, efficiently, and humanely processing eligible individuals at the border,” Homeland Security Secretary Alejandro Mayorkas said in a statement on Friday. “It is important to underscore that this process will take time, that we are ensuring public health and safety, and that individuals should register virtually to determine if they are eligible for processing under this program.”

Another 25 asylum seekers arrived at the port of entry on Monday to be processed.

DHS has said that the asylum seekers, once admitted to the US, will be placed in “alternatives to detention” programs, under which they are released into the US but monitored, usually by a social worker, in an effort to encourage them to show up for their immigration court dates. Such programs are humane and relatively low cost compared to immigration detention.