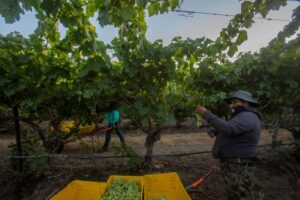 Undocumented farmworkers could qualify to apply for green cards immediately under the immigration legislation that President Joe Biden unveiled on his first day in office.

Farmworkers would be eligible to apply for permanent legal residency if they have worked in agriculture for at least 100 days during four of the previous five years. They would be required to pass a criminal background check.

The bill, the U.S. Citizenship Act of 2021, is estimated to benefit about 1 million undocumented farmworkers.

People who came to the country without authorization as children and currently have deportation protection under the Deferred Action for Childhood Arrivals program, as well as those who gained Temporary Protected Status due to extraordinary and temporary conditions, such as civil war or an environmental disaster in their home country, also would be eligible for green cards immediately.

The bill is expected to create a three-year path to citizenship for farmworkers, as well as DACA and TPS recipients, according to Carl Bergquist, who provides legal and policy counsel for the Coalition for Humane Immigrant Rights, a Los Angeles-based organization focused on advancing justice and inclusion for immigrants.

Diana Tellefson Torres, executive director of the UFW Foundation, a nonprofit organization that supports immigrants, celebrated the news. It comes amid the pandemic and follows four years of enforcement policies that, she said, resulted in the “terrorization of farmworker communities in rural areas.”