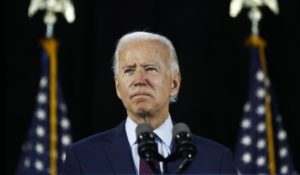 He would expand sanctuary locations, limit ICE’s ability to deport criminals in local jails, and reverse deportations for some military veterans already ousted because of criminal records.

Perhaps no other issue draws as stark a contrast between Mr. Biden and Mr. Trump as immigration.

The unity platform, developed by backers of Mr. Biden and one-time chief rival Sen. Bernard Sanders, would wipe clean every major immigration policy of the last three and a half years, replacing them with more legal immigration and eliminating the controls that have tamped down on illegal immigration.

The platform calls for an immediate 100-day halt to all deportations, and would unleash an army of overseers to police the way the Border Patrol and ICE’s deportation officers enforce immigration policy. A special eye would be paid toward the “racial underpinnings” of Trump policies.

The plan said “systemic racism” has infected “our immigration system, including the policies at our borders and ports of entry, detention centers and within immigration law enforcement agencies, policies and operations.”

The platform would erase Mr. Trump’s travel ban for countries that don’t cooperate with U.S. authorities, and would invite those denied entry over the last years to reapply.

The biggest-ticket item is a “roadmap to citizenship” for nearly 11 million illegal immigrants. Those who’ve been working illegally in essential services during the coronavirus pandemic would get fast-tracked.

The immigration proposal was one of six areas in the new unity platform. The others are health care, education, the economy, criminal justice and climate change.