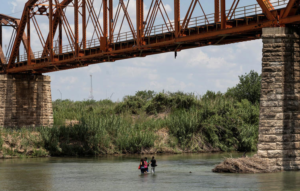 WASHINGTON (Reuters) -U.S. law enforcement officers will ask, when detaining immigrants in the country illegally, whether they are parents or guardians to avoid separating families under a Biden administration policy launched on Thursday.

The new U.S. Immigration and Customs Enforcement (ICE) directive replaces Trump-era guidance issued in 2017 that did not explicitly require officers to inquire about, or record, parental status or guardianship.

A Democrat, Biden campaigned on a promise to build a more humane and orderly immigration system to counter that of Trump, his Republican predecessor.

On taking office early last year Biden prioritized immigration enforcement against those convicted of more serious crimes. As a result, arrests and deportations of immigrants living illegally in the United States plummeted compared with a year earlier.

But federal courts in recent months have blocked Biden’s efforts to focus on serious criminal offenders and Republicans have criticized the administration’s approach, saying fewer detentions and deportations have encouraged more illegal crossings.

In another departure from Trump administration policy, the new guidance applies to parents or guardians of incapacitated adults as well as children.

ICE Acting Director Tae Johnson said in a statement that officers will preserve family unity “to the greatest extent possible.”

Some immigration activists on Thursday said the measures did not go far enough. Heidi Altman, policy director at the National Immigrant Justice Center, which provides legal services to refugees and asylum seekers, called the memo the “bare minimum.”

After taking office in January 2021, Biden implemented a series of measures to reverse what he called “cruel and senseless” Trump policies that separated thousands of children and parents at the U.S.-Mexico border. Biden launched a task force to reunite families that were still apart.