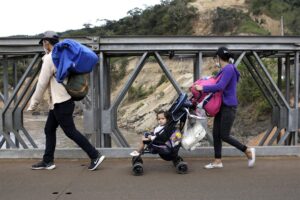 WASHINGTON — President Joe Biden’s immigration legislation will include new protections for children migrating from Central America, including the return of an Obama-era program that lets children apply for refugee or asylum status in the United States from their home countries.

In August 2017, the Trump administration stopped allowing children to seek asylum from El Salvador, Guatemala, and Honduras, a key feature of the Central American Minors program begun under Obama.

Other details of the legislation revealed on Thursday include hiring more immigration judges to handle asylum cases, offering “humane alternatives” to immigrant detention, and changing the term “alien” to “noncitizen” in immigration laws.

The bill will also include an expedited path to citizenship, allowing young immigrants are known as Dreamers, certain farm workers, and immigrants under Temporary Protected Status to immediately be eligible for green cards and then citizenship within three years. All other undocumented immigrants in the United States since Jan. 1 would be eligible for green cards within five years and citizenship in eight years under the legislative proposal, according to a staff member for Sen Robert Menendez, D-N.J., who spoke with reporters at an event hosted by American Business Immigration Coalition, an advocacy group.

Tackling immigration, an issue is known for its political divisiveness, as his first major legislative proposal could prove difficult for the new president.

Menendez said he was “under no illusion” that passing the legislation would anything but “a Herculean task.”

The bill would need 60 votes to make it through the Senate, and with Vice President Kamala Harris as a tie-breaker, Menendez said he would need to bring at least nine Republicans to agree to the bill.