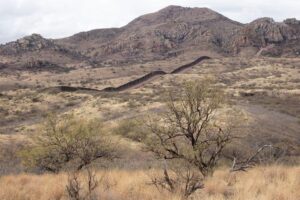 The new president said he won’t build “another foot of wall” — but border communities fear he may already be breaking his promise.

Former President Donald Trump built only a fraction of the “big, beautiful” U.S.-Mexico border wall he repeatedly promised voters — but its effects, experts say, have nevertheless been “catastrophic” and far-reaching.

With Trump now out of the White House, conservationists, tribal leaders and others are hopeful President Joe Biden will take immediate action to not just halt construction but dismantle the parts of Trump’s wall that have encroached on vulnerable ecosystems and sacred lands. It remains to be seen, however, what the new president plans to do with the controversial structure.

Biden vowed in August not to build “another foot of wall” during his presidency and, on his first day in office, signed a proclamation pausing all wall construction for 60 days. But reports this month of ongoing construction along some stretches of the barrier, including in a part of Arizona designated as critical habitat for endangered jaguars, have left environmentalists and community members anxious and uncertain as to whether the president intends to keep his promise. Biden has also stayed silent as to whether he intends to take down any existing wall or what his plans are — if any — to mitigate the damage that Trump’s wall has already wreaked.

Trump promised his supporters his administration would build at least 450 miles of new barriers at the southern border by the end of 2020 but fell well short of his goal. According to a December report by U.S. Customs and Border Protection, 438 miles of “border wall system” was constructed under Trump, but of that, only about 40 miles was new primary fencing. Trump mostly replaced parts of existing wall that were outdated or in disrepair.