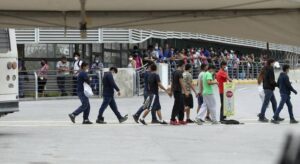 Prosecutors can now dismiss cases for immigrants who have been longtime green card holders, are pregnant or elderly, have a serious health condition, or have been in the US from a young age.

After years of being told by the Trump administration to aggressively pursue most deportations, US immigration prosecutors have now been given broad discretion in which cases they decide to pursue or drop altogether, according to government documents obtained by BuzzFeed News.

Immigration and Customs Enforcement prosecutors have been instructed by the Biden administration that they can consider dismissing cases for immigrants who have been longtime green card holders, are pregnant or elderly, have a serious health condition, or have been in the US from a young age, the documents state.

The guidance, written by chief ICE attorney John Trasviña, a President Biden appointee, was sent to prosecutors on May 27 and represents a shift in how the agency pursues deportation orders in immigration court by emphasizing the discretion prosecutors have in court. While it does not require prosecutors to toss cases, it could lead to more immigrants having the ability to push for delays or dismissal of their deportation cases.

Biden officials believe the memo is a way to cut the growing immigration court backlog and more efficiently use resources on cases that deserve attention. The staggering backlog of cases in immigration court, which number over 1 million, is unsustainable, officials say. Some cases take years to be heard.

Department of Homeland Security officials also argue that the memo empowers ICE prosecutors to make decisions on who they pursue in court proceedings and how best to use their time. One ICE prosecutor who spoke with BuzzFeed News said the message of the memo was appreciated: “It’s good to be treated as a professional with legitimate judgment instead of an order-follower.”