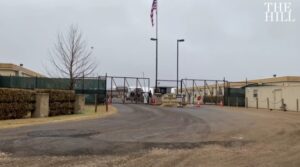 President Biden on Friday pledged that a shelter for young migrants in Texas “won’t stay open very long” amid bipartisan criticism over his administration’s decision to reopen the facility for migrants ages 13 to 17.

Critics saw the opening of the facility in Carrizo Springs, Texas, as similar to the hard-line immigration tactics of former President Trump’s administration, though Biden insisted his administration’s approach was different.

“Our hope and expectation is that won’t stay open very long, that we’ll be able to provide for every kid who comes across the border safely to be housed in a facility that’s licensed,” Biden said during an interview with Univision on Friday.

Biden said the shelter was opened because “thousands” of unaccompanied migrant children were crossing the border. He added that his administration had been able to place a “significant number” of them in shelters throughout the country.

The New York Times reported that more than 2,000 unaccompanied young migrants have been intercepted by Border Patrol in the past week.

The president said his administration is working to connect young migrants with their families while they wait for a hearing.

“Get them to the families that they came here to see or they’re looking for. And we’ve already connected thousands of them … so that’s our hope, is to unite these children with families while they wait to have a hearing,” Biden told Univision.

The interview marked the first time Biden has directly spoken on the situation. The White House has previously said that it was a temporary measure needed to keep young migrants safe during the COVID-19 outbreak.

During an appearance on “The View” on Thursday, White House press secretary Jen Psaki said this was not like Trump’s policy and insisted it was the “best decision” to keep kids safe due to the coronavirus pandemic.

By Jordan Williams for THE HILL
Read Full Article HERE