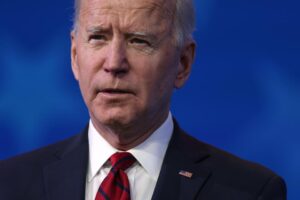 President-Elect Joe Biden is still days away from entering the office and yet, he is already facing his first immigration challenge, with his transition team forced to respond to a caravan of thousands of migrants and asylum-seekers making its way to the US border.

On Sunday, a Biden transition official sought to deter those traveling with the caravan from continuing the journey, warning that the incoming administration’s arrival will not mean open borders.

“Overcoming the challenges created by the chaotic and cruel policies of the last four years, and those presented by Covid-19, will take time,” the official told Reuters, speaking on background.

“In the meantime, the journey to the United States remains extraordinarily dangerous, and those in the region should not believe anyone peddling the lie that our border will be open to everyone next month,” the official said.

Despite the warning, between 7,000 and 8,000 people are estimated to be traveling with the caravan, including families with small children.

On Sunday, Guatemalan forces clashed with a large group of the caravan’s members, with officers using sticks and tear gas in an aggressive effort to stop the group in its tracks.

According to Reuters, the clash unfolded early on Sunday morning with security officials seeking to prevent some 3,000 migrants and asylum seekers from moving forward as they reached the village of Vado Hondo, roughly six miles south of Chiquimula in southeastern Guatemala.

“We want the Guatemalans to let us past,” Joaquin Ortiz, a Honduran traveling with the caravan told the agency. “Because we’re not leaving here. We’re going to carry on. I want to get through because it’s horrible in our country. There’s nothing in Honduras.”

With migrants and asylum seekers determined to reach the US, Biden will likely be forced to address the situation head-on over the coming days.