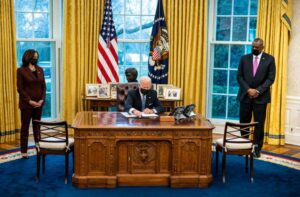 President Joe Biden announced his support for a pro-business immigration agenda in his immigration plan released Jan. 20, the day of his inauguration.

“Immigrants have helped strengthen America’s families, communities, businesses, and workforce, and economy, infusing the United States with creativity, energy, and ingenuity,” said Biden, in a statement released by the White House.

A summation of the immigration bill Biden sent to Congress on day one of his administration can be read here: https://bit.ly/3t9tLkS. In the fact sheet, the president stated that his proposal would clear employment-based visa backlogs by recapturing unused visas and eliminating per-country visa caps.

The children of H-1B visa holders currently face additional challenges, as they age out of their H-4 dependent status upon turning 18, requiring them to either return to the home country, or to port their status into a student visa, if possible. Biden said his plan would address the crisis of children aging out of the system.

Critically, Biden’s proposal would also allow work authorization for H-4 visa holders, the dependent spouses of H-1B workers. President Barack Obama, via executive order in 2015, allowed work authorization for H-4 visa holders whose spouses were on green card track, but the Trump administration — in a battle that lasted throughout his tenure — sought to revoke H-4 EAD. A final draft of Trump’s revocation of the rule still remains pending with the Office of Management and Budget’s Office of Information and Regulatory Affairs.