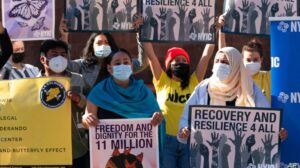 As VOA recently reported, Biden is expected to prioritize restoring DACA — an Obama-era program that protects undocumented immigrants who were brought to the U.S. as children from deportation — rescind travel restrictions on 13 countries and put in place a 100-day freeze on deportations while his administration issues new guidance.

When it comes to temporary workers and international students, where H-1B and F-1 visas allow nonimmigrants to live and work temporarily in the U.S. under certain conditions, experts said they believed the new president would overturn some of the restrictions implemented in the last four years.

But Sarah Pierce, policy analyst at the Migration Policy Institute, a nonpartisan organization in Washington that researches immigration policy, noted that immigration matters might not be at the top of Biden’s to-do list during a pandemic that continues to inflict economic damage.

“A lot of legal immigration stuff might move slower just because they have so much to do. … But I would expect them to be friendly to H-1Bs … and to, at the very least, walk back the restrictions put on by the Trump administration,” Pierce said.

Citing a need to protect American workers, the Trump administration signed an executive order to limit legal immigration and the issuance of temporary work visas. In November, the White House released another order restricting H-1B jobs by tightening the definition of “specialty occupation” that qualifies a foreign worker to be hired. Meanwhile, the Department of Labor released a rule increasing the minimum wages and salaries U.S. employers must pay foreign workers by 30%.