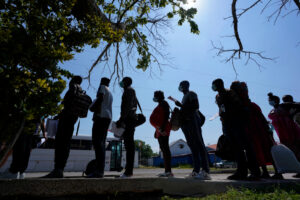 A federal attorney argued the government had the right to do so, even if it doesn’t intend to use numerical caps.

A Justice Department attorney argued Tuesday for American immigration officials’ authority to limit the number of asylum-seekers allowed to cross into the U.S. from Mexico each day, even as President Joe Biden’s administration is attempting to distance itself from the Trump administration’s policy imposing caps on asylum applicants at border ports of entry.

During a hearing before a federal judge in San Diego, immigrant rights advocates squared off with a federal government attorney sent to advance the somewhat dissonant argument renouncing the prior administration’s approach while preserving the current one’s legal right to reinstate it.

Alexander Halaska of Justice’s Office of Immigration Litigation told U.S. District Court Judge Cynthia Bashant that the present administration is reassessing the policies that officials often refer to as “metering,” but which critics call a “turnback” of asylum-seekers.

“The queue management policies at issue are under review,” Halaska said, adding that revised guidelines are expected within 60 days.

Halaska insisted that the policies were designed to “prevent operational emergencies” that overwhelm border facilities, creating dangers and unsanitary conditions for both immigrants and border officials. “The metering policies are geared towards preventing those emergencies before they occur,” he said.

However, an attorney for the immigrant rights group Al Otro Lado said evidence obtained since the suit was filed in 2017 showed that the policy was not linked to exigencies and applied even when facilities had ample space.

“As a factual matter, there are no operational emergencies in the record before you,” said Stephen Medlock of law firm Mayer Brown.

Medlock also said the Biden administration’s statement of its intentions shouldn’t affect the course of the litigation.

“I don’t think the government’s commitment to withdraw those memos should have any effect in this case [intended] to keep the government from ever doing this again,” the lawyer said.