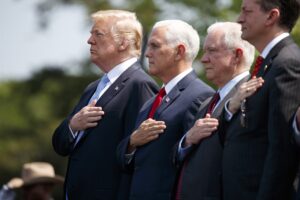 Among the unreleased documents is the agenda from a May 2018 meeting that included a show of hands vote by Trump officials on whether to separate families.

WASHINGTON — The Justice Department has refused to disclose key documents from the Trump administration’s planning of the “zero tolerance” policy that separated thousands of migrant families at the U.S. border, according to a document filed in a class action lawsuit in Arizona late Friday.

Among those documents not given to plaintiffs lawyers representing separated families seeking damages was the agenda from a May 3, 2018 meeting, which NBC News has reported included a show of hands vote to move forward with separating families.

In requesting documents from the Trump administration’s planning for zero tolerance, the lawyers representing the separated families argued the materials could show the officials intentionally sought to inflict emotional harm on the children and parents they separated. Lawyers for the Biden Justice Department were given till April 2 to respond, and then asked for an extension until Friday, April 9.

The Biden administration did agree to hand over some documents, largely by unredacting previously redacted material. But Justice Department lawyers argued in the filing that the government must protect the right of the government to keep certain planning documents confidential.

“Those privileges protect institutional interest in the decision making process and the ability of a wide range of government employees to provide candid advice,” Justice Department lawyers said in their reasoning. “At the same time, the United States recognizes the significance of this matter and has substantially narrowed its privilege claims here.”