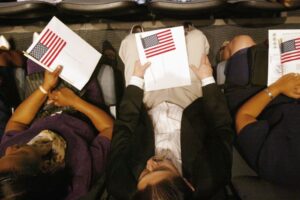 U.S. Immigration and Citizenship Services will revert back to using a previous version of the civics test required to become a U.S. citizen.

THE BIDEN administration confirmed Monday that it will scrap the Trump administration’s changes to the U.S. citizenship test, which made the exam longer and more difficult.

U.S. Citizenship and Immigration Services will revert back to using an exam created in 2008, the agency said in a policy alert.

Immigrants must pass an English proficiency test and a civics exam in order to become citizens. The Trump administration last year doubled the length of the civics test, updating it to require applicants to answer 12 out of 20 questions correctly to pass. Immigrants were previously required to correctly answer six out of 10 total questions.

The Trump administration also increased the number of potential questions from 100 to 128, expanding the amount of information immigrants must study in preparation for the exam. And the administration altered the answers to a few questions in a way that critics say demonstrated a conserative bias.

BuzzFeed News first reported earlier this month that the Biden administration was planning to do away with the Trump-era changes.

USCIS will now use the previous, shorter exam. Since the Trump-era test was implemented on Dec. 1, USCIS said it will offer some immigrants who filed their naturalization applications between then and March 1 the option to take either test in case they had already begun preparing for the 2020 version of the exam.