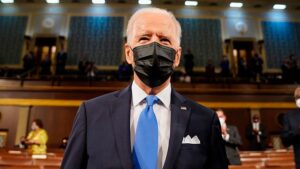 President Biden on Wednesday called on Congress to pass bipartisan immigration reform, including a path to citizenship for undocumented immigrants.

The remarks echoed promises he made during his campaign on the matter, but stopped short of an earlier pledge to force legislation through without Republican support.

“Immigrants have done so much for America during this pandemic and throughout our history. The country supports immigration reform, we should act,” said Biden in his first speech before a joint session of Congress .

In his speech, Biden defended his American Jobs Plan, an infrastructure proposal some advocates say should include elements of immigration reform.

In particular, immigration advocates have defended the economic benefits of including regularized status with a path to citizenship for millions of undocumented workers in the infrastructure proposal.

But the question still remains whether Democrats will push the legislation through Congress,circumventing the need for Republican support in the Senate.

Biden centered his speech on defending the core of his social proposals, from jobs and infrastructure, education and childcare, taxation, climate, foreign policy and race, but didn’t touch on immigration until about an hour into his speech.

“Let’s end our exhausting war over immigration,” Biden said to a sparse chamber.

Biden showed openness to changing his comprehensive immigration proposal, but laid out a baseline on who should receive legalization with a path to citizenship.

“Congress needs to pass legislation this year to finally secure protection for Dreamers, the young people who’ve only known America as their home and permanent protections for immigrants who are here on Temporary Protected Status [TPS], who came from countries beset by man manmade and natural-made violence and disaster, as well as a pathway to citizenship for farmworkers who put food on our tables,” said Biden.