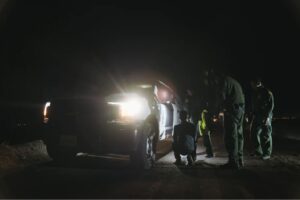 D.C. Circuit Judge Justin Walker struggled to pin down the Biden administration’s approach to the border Wednesday. In one lawsuit, he said, government officials argue that a Trump-era program that sends asylum seekers into Mexico to await a hearing is too dangerous.

Yet government lawyers are defending a separate policy that is expelling far more migrants to nations such as Haiti, despite the dangers they might face there. He called their position, a “self-contradiction.”

“So what are we supposed to do with this?” Walker asked the Department of Justice lawyer at a hearing Wednesday, after she asked a panel of judges to let the expulsions continue for now.

The appeals hearing over a lawsuit seeking to end the expulsion of migrant families unfolded as the Biden administration is hitting the one-year mark, with mixed results on President Biden’s pledge to create a far more humane immigration system than did President Donald Trump, who sought to deport as many immigrants as possible. Supporters say Biden has made great strides: He has shielded millions of immigrants from deportation, ended family detention, halted the border wall, scrapped Trump’s travel bans, welcomed tens of thousands of Afghans and raised the annual refugee cap to 125,000, which the White House said is the highest since 1993.

His administration has also granted “temporary protected status” to approximately 430,000 additional undocumented immigrants from countries such as Venezuela, Yemen and Haiti, allowing them to apply for work permits as long as they were already living in the United States.
White House immigration policy adviser Esther Olavarria said at a panel discussion Wednesday hosted by the nonpartisan Migration Policy Institute (MPI) that more countries are under “active consideration” for temporary protected status.

But the administration has also expelled hundreds of thousands of migrants who attempted to cross the border illegally, federal records show, as they grapple with a record influx at the southwest border.