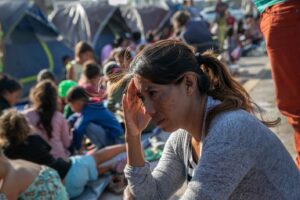 The program will start again in border towns as soon as next week, a source familiar with the matter told NBC News.

The Biden administration will restart the Trump-era “Remain in Mexico” policy following a deal with the Mexican government, a person familiar with the matter told NBC News.

The policy, formally known as the Migrant Protection Protocols, requires migrants seeking asylum to wait outside the United States for their immigration court hearings.

The program will start again in border towns as soon as next week, the source said.

Biden had ended the program when he took office this year, calling it inhumane because of the violence migrants faced waiting in Mexico for their court hearings. But Texas and Missouri officials sued the administration in April over the suspension of the program, and a federal judge in Texas ordered its reinstatement pending the outcome of the lawsuit in August.

The administration fought the order but lost in federal appeals court and in the Supreme Court before agreeing to comply with the court’s order.

Speaking about Biden’s opposition to the policy, White House press secretary Jen Psaki said Monday that the president “continues to stand by exactly those comments and statements, and the secretary of Homeland Security put out memorandum conveying we want to end this program. But we also believe in following the law, and that’s exactly what we’re doing, as there was a ruling that required us moving forward with implementation.”