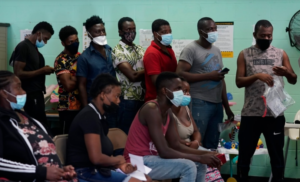 The Biden administration finalized a rule Friday to remove hurdles to immigration to anyone deemed “likely” to become dependent on public benefits while trying to obtain a visa or become a U.S. permanent resident.

The DHS announcement restores the historical understanding of a “public charge” that had been in place for decades, DHS said.

It means DHS will no longer label a noncitizen as a public charge if they received certain non-cash benefits that were available to them such as the Supplemental Nutrition Assistance Program or other nutrition programs, Children’s Health Insurance Program (CHIP), Medicaid — except for long-term institutional care — housing benefits, or anything related to immunizations or testing for communicable diseases.

“Consistent with America’s bedrock values, we will not penalize individuals for choosing to access the health benefits and other supplemental government services available to them,” Mayorkas said.

In 2019, the Trump administration broadened the definition of public charge to deem noncitizens who received assistance to pay for food, housing, energy, child care or used Medicaid and other benefits for more than 12 months within any 36-month period as a public charge and possibly deny them admission or permanent residence, also known as a green card.

Within months of taking office, the Biden administration stopped enforcing the guideline established under the Trump administration.

Before the 2019 rule, almost all non-cash government benefits such as Medicaid or nutrition assistance were excluded from public charge consideration.

Researchers from the Migration Policy Institute (MPI) said confusion and skepticism over the 2019 change likely kept many immigrants and their U.S.-born relatives from accessing benefits and services for which they were eligible.