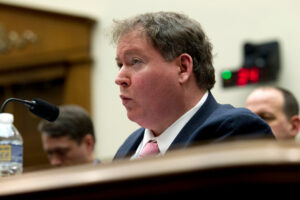 The Biden administration on Wednesday made its first move to set the nation’s immigration courts in a new direction, announcing plans to replace the official who has overseen the system for nearly four years.

One week into President Joe Biden’s term, the Justice Department said Jean King will soon take over on an acting basis as director of the Executive Office for Immigration Review.

Staffers and judges were informed of the shift Wednesday morning in a memo from Acting Deputy Attorney General John Carlin. The move will be effective Sunday.

“Jean will provide continuity in EOIR’s leadership until a new director is selected,” Carlin wrote, according to a person who received the memo.

The personnel change comes after complaints from immigration advocates who were troubled to see McHenry’s name on the agency-wide list the Justice Department released last Thursday of those holding top posts on acting or continuing basis for the first weeks of the Biden presidency.

McHenry’s presence on the roster of officials staying on into the new administration rankled immigration reformers seeking an immediate change in direction for an operation with huge power over immigrants accused of being in the U.S. illegally.

“I saw that list….and I was just shocked,” said Jeremy McKinney, an immigration lawyer in Greensboro, N.C., prior to Wednesday’s announcement. “The policies he was putting out in terms of his attempts to control what judges do inside the courtroom, those efforts have been monumental over the last three years. To see he’s one of the hangers-on is very surprising.”

“To have someone like that leading EOIR, who doesn’t embrace the vision of restoring due process & fairness….this would undermine that goal and that hope,” Marielena Hincapie of the National Immigration Law Center said last week.