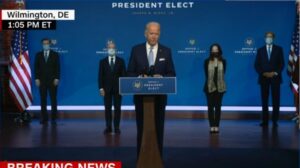 When President-elect Joe Biden comes into office, he will inherit the Trump administration’s restrictionist immigration agenda, which cut access to asylum and has kept migrants in limbo in Mexico while they await humanitarian protection in the US.

Biden has promised swift change, but it won’t be simple.

“They’re realizing that they have two months to figure out a really complicated mess of things,” a source familiar with the transition told CNN, referring to the Biden team. “People are really overwhelmed trying to figure out the sheer issues, the sheer number of pieces you have to coordinate. This is the genius of Stephen Miller.”

Miller, President Donald Trump’s lead immigration adviser and the architect of his hard-line immigration agenda, has shepherded some of the most restrictionist immigration policies — and continues to do so — with the intent of curtailing immigration to the US. The hundreds of executive actions rolled out by the Trump administration have drawn the ire of immigrant advocates and lawmakers, who argue they’ve betrayed the country’s welcoming stance.

The makeup of the Biden-Harris transition team reviewing the Department of Homeland Security appears to signal the incoming administration’s awareness of those actions, with Ur Jaddou, former chief counsel at US Citizenship and Immigration Services, as the team lead, and with the selection of Alejandro Mayorkas as Homeland Security secretary. But undoing policies — as Biden has said he’d do — will be a steep challenge, both logistically and politically.

“They’re coming into the office with a mandate and an intent — in many ways needed and appropriate — to reverse Trump-era immigration policies,” a former Homeland Security official told CNN.

Even changes that are ultimately up to the president could face hurdles, including Biden’s pledge to bring more refugees to the United States. Biden has said he wants to raise the cap to 125,000 — an increase from the historic low of 15,000 put in place by the Trump administration.