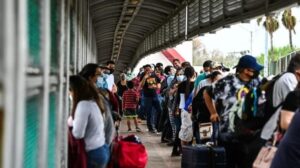 The Biden administration on Tuesday opened a new emergency intake facility for unaccompanied minors near an overcrowded Customs and Border Protection (CPB) facility in Texas.

The Health and Human Services (HHS) Office of Refugee Resettlement (ORR) said in an emailed statement that it is opening the Delphi Emergency Intake Site in Donna, Texas, to provide shelter for unaccompanied teenagers ages 13 to 17 years old.

The site will receive approximately 375 children on Tuesday and has a potential capacity of up to 1,500 beds.

ORR said in a fact sheet that the Delphi site is a temporary measure that “provides needed capacity to accept children referred by Customs and Border Protection (CBP) into ORR care where they can be safely processed, cared for, and either released to a sponsor or transferred to an appropriate ORR shelter for longer-term care.”

A COVID-19 screening protocol will be implemented at the site, the office said.

The Delphi Emergency Intake Site was first reported Tuesday by Axios, which noted that it is next to a CBP processing center where photos and videos have revealed less-than-ideal conditions at the border.

Photos that were first released by Rep. Henry Cuellar (D-Texas) showed crowded conditions at a makeshift facility in Donna. The photos were released amid criticisms that the administration is not being fully transparent about conditions at the border amid a surge of unaccompanied minors.

The Biden administration released photos and videos from the facility in Donna, as well as a facility in El Paso, the next day.

By Jordan Williams for THE HILL
Read Full Article HERE