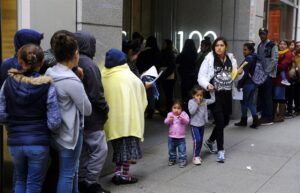 The Department of Justice told the Supreme Court that it was dropping its defense of the Trump-era expansion of the “public charge” rule.

The Biden administration notified the Supreme Court on Tuesday that it will no longer defend a government policy seeking to impose new limits on the admission of immigrants considered likely to become overly dependent on government benefits.

The Department of Homeland Security announced in 2019 that it would expand the definition of “public charge” to be applied to people who could be denied immigration because of a concern that they would primarily depend on the government for their income.

In the past, the designation was largely based on an assessment that an immigrant would be dependent upon cash benefits. But the Trump administration proposed to broaden the definition to include noncash benefits, such as Medicaid, supplemental nutrition and federal housing assistance.

Anyone likely to require that broader range of help for more than 12 months in any three-year period would be swept into the expanded definition.

The federal government has long had authority to refuse admission of immigrants who were likely to become public charges, but the term has never been formally defined.

The Trump policy proposed to fill that void, adding noncash benefits and such factors as age, financial resources, employment history, education and health, arguing that the expansion would reinforce “the ideals of self-sufficiency and personal responsibility, ensuring that immigrants are able to support themselves and become successful here in America.”

In response to a series of lawsuits, lower courts were divided on whether the revised rule violated federal law, but its enforcement was eventually blocked, so the Trump administration appealed. The Supreme Court agreed in late February to consider the issue.