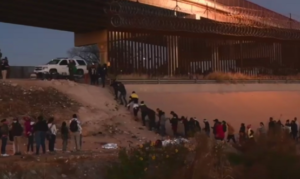 A Texas federal court this week paused the ending of the Migrant Protection Protocols (MPP) — a Trump-era policy that involved migrants being returned to Mexico while their cases went through the system. It saw tent courts set up along the border as part of an effort to stop the release of migrants into the interior.

The Biden administration said the policy was cruel and ineffective, forcing migrants to camp out in Mexico — and on taking office the president immediately moved to scrap it. The ending of the policy in early 2021 coincided with a massive surge in illegal migration at the border — a surge that hit record levels and is still ongoing.

District Judge Matthew Kacsmaryk ruled on that question this week and barred the administration from unwinding the program. A DHS spokesperson told Fox News Digital on Saturday that DHS Secretary Alejandro Mayorkas was “well within his authority to terminate the prior administration’s program.”

“We disagree with this decision and are determining next steps,” the spokesperson said.

The confusion surrounding MPP is not the biggest question mark over the administration’s immigration policy. That belongs to Title 42, which is currently scheduled to end on Wednesday, which many fear will unleash a new wave of migration into the U.S.