Home Resources Beyond The Border, Fewer Immigrants Being Locked Up But ICE Still Pays For Empty Beds 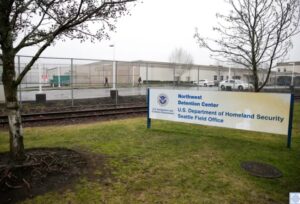 The sprawling detention center in Tacoma, Wash., housed more than 1,300 immigrants on average at the height of former President Donald Trump’s immigration crackdown. Now nearly four out of every five beds at the facility are empty.

That’s because Immigration and Customs Enforcement released hundreds of people to lower the risk of COVID-19, and because the agency is arresting and detaining fewer unauthorized immigrants under orders from President Biden.

But that doesn’t translate into savings for the U.S. government — or the American taxpayer. In fact, because of the way ICE structures its contracts with private companies and localities that own and operate the detention centers, the agency guarantees it will pay for a minimum number of beds whether they are filled or not.

For dozens of detention centers across the country with these “guaranteed minimums,” ICE pays more than $1 million a day for empty detention beds, according to an NPR analysis.

“The numbers that we have right now on detention are the lowest they’ve been in 20 years,” said Silky Shah, executive director of the nonprofit Detention Watch Network. “But we have the capacity for a lot more, and a lot of those beds continue to get paid for.”

Beyond the Southwest border, where temporary holding facilities are overflowing with unauthorized migrants and children, the Biden administration faces a very different challenge in the interior of the country.

ICE and the detention companies argue that a guaranteed revenue stream is needed in order to keep operations going.

But these deals have been controversial for years. In February, a government watchdog agency criticized how ICE awards detention contracts.