Home Uncategorized Beto O’Rourke in ‘Around the Table’ Talks Guns, Racism And Immigration With Texas voters 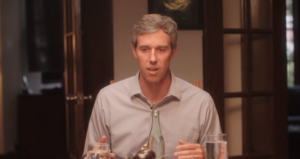 Just days after a mass shooting claimed the lives of 22 people in an El Paso, Texas, Walmart, former congressman and Democratic presidential candidate Beto O’Rourke invited ABC News and three Texan voters into his home for the network’s premiere episode of “Around the Table,” a series bringing together candidates and voters for a candid conversation around the dinner table.

Joining O’Rourke and his wife, Amy, at their El Paso home were “Nightline” co-anchor and Chief National Correspondent Byron Pitts and Viviana Rivera, Caleb Morris and Tess Clarke. The three voters going into the O’Rourke’s family-style dinner said they were undecided on who they were currently supporting in the presidential race.

Rivera is a life-long El Paso native who retired from a federal government job and has voted both Republican and Democrat in the last couple elections, she told ABC News some of her biggest concerns was legal and safe immigration policy.

Meanwhile 36-year-old Clarke, from Dallas, Texas, said she is currently “politically homeless,” but couldn’t see herself voting for President Donald Trump in 2020 after not identifying with either party in 2016.

Right off the bat, during one of the first questions from Clarke in light of the shooting in El Paso, she asked what “commonsense gun reform” looks like given her concerns that her faith-based community would see limiting gun rights as another step towards limiting religious rights.

“It would begin with a background check on every weapon purchased and every weapon transferred,” O’Rourke responded. “This is– perhaps a little bit more controversial. But I think you should also have to have a license for owning firearms.”

Just days later when re-launching his presidential campaign after a 12-day hiatus from the trail, O’Rourke said he would also be proposing a mandatory assault rifle buy-back program, telling reporters, “In the past, I’ve said this is something we should consider I want to think about it. I want to talk to people about it. I’ve thought about it…that’s what we’ve got to do.”