Home Uncategorized Bernie Sanders on What He Learned From Baseball, Brooklyn And His Family’s Immigrant Roots 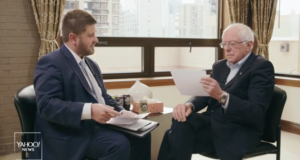 NEW YORK — Bernie Sanders thinks of himself as a Vermonter, but he knows other people don’t necessarily see — or hear — him that way.

“Some people even suggest — hard to believe — that I have a Brooklyn accent. I don’t know why they say that, but that’s what some people say,” Sanders joked in a conversation with Yahoo News last Thursday.

Sanders, a Vermont senator and Democratic presidential candidate, has long disdained what he views as “political gossip” and sought to focus on policy. This is clearly part of why he hasn’t made his personal story a bigger part of his campaign, but his writing suggests that the pain his family went through in Brooklyn, including the death of his mother when he was 18, was part of what led him to leave New York City for Vermont. The family’s story has also been a driving force behind Sanders’s progressive politics.

While Sanders doesn’t make his personal story a cornerstone of his campaign, he made clear in a rare interview about his immigrant roots that the experience deeply influenced his outlook, even if he now claims New England as his home.

Sanders’s parents were both part of the exodus of Jews who left Eastern Europe for the United States. His father, Eli, came from Stopnica, which is in modern-day Poland. Sanders’s mother, Dorothy, was born in New York City to parents who came from Russia and Poland. Immigration documents, which Yahoo News shared with Sanders, showed that his father came to New York in 1921 at the age of 17 onboard a ship called the Lapland. Passenger manifests listed his father as “Eliasz Gitman.” Sanders said that as with many Jewish immigrants, his father’s name was “changed along the way” as he was naturalized.