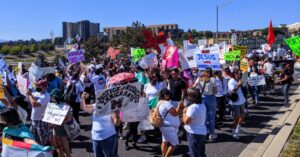 The Senate parliamentarian ruled for the second time on Sept. 29 that Democrats could not include a pathway to legal immigration status for 8 million undocumented people in their budget reconciliation bill.

While the ruling is nonbinding, it’s unclear whether Senate Democrats would agree to defy the parliamentarian, a nonpartisan official who determines how U.S. Senate rules and precedent should be applied to lawmaking. Neither of Colorado’s U.S. senators have said they’d support such a strategy, though they told Newsline they’d keep pushing for comprehensive immigration reform.

Under Parliamentarian Elizabeth MacDonough’s ruling, Senate lawmakers would need 60 votes to pass immigration reform rather than the simple majority required to pass budget reconciliation — a process reserved for matters that affect spending, revenues, the deficit or the debt limit. It would be nearly impossible to get 60 votes as most Republicans oppose a pathway to citizenship for undocumented people, and the Senate is evenly split between the parties.

The budget reconciliation package, which contains funding to expand social initiatives such as community college aid and universal preschool, has hit an impasse in the Senate as moderate Democrats push back against the $3.5 trillion price tag. Democrats are a ways from resolving intra-party conflicts over the legislation’s cost, let alone agreeing on including comprehensive immigration reform after MacDonough’s ruling called it a “weighty policy change” that shouldn’t be included in the budget reconciliation package.

When asked when and how they would support moving forward on immigration reform following the parliamentarian’s ruling, neither of Colorado’s Democratic U.S. senators specified a particular timeline or strategy. However, Sens. Michael Bennet and John Hickenlooper both voiced support for so-called “Dreamers” who were brought to the U.S. as children without legal documentation and have temporary protection from deportation under the Deferred Action for Childhood Arrivals program, or DACA.