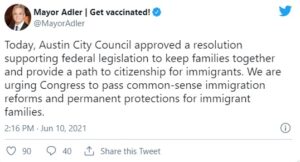 Item 40 encourages federal lawmakers to pass legislation working to keep immigrant families together and provide a clear path to citizenship.

AUSTIN, Texas — The Austin City Council passed a resolution in support of federal legislation on immigration reform at its meeting Thursday. The resolution, or Item 40, encourages federal lawmakers to pass a series of bills meant to help keep immigrant families together and create a clearer path to citizenship.

Specifically, Item 40 is in support of three acts of federal legislation. According to the resolution, two are based on providing clear paths to citizenship for Dreamers and undocumented farmworkers and their families. The other addresses families being together.

Approve a resolution supporting federal legislation to keep families together and provide a path to citizenship for immigrants by urging the passage of the American Families United Act, the American Dream and Promise Act of 2021, and the Farm Workforce Modernization Act of 2021.

Copies of the resolution are to be sent to Texas representatives and senators along with President Joe Biden. Councilmember Greg Casar sponsored the bill. Councilmembers Vanessa Fuentes and Sabino Renteria co-sponsored it along with Austin City Mayor Steve Adler and Mayor Pro-Tem Natasha Harper-Madison.

“As the son of Mexican immigrants and representing the most-immigrant part of our city, I’ve seen how important this fight for justice for all families is,” Casar said. “Thanks to years of organizing, Austin is now on the frontline of protecting immigrant families and pushing our federal lawmakers to keep families together. We need Congress to act – it’s time for permanent protections for immigrant communities.”

“My mother immigrated to the U.S. for a chance at a better life,” Fuentes said. “It’s the story of my family, many of the people I represent in District 2 and countless other Americans. Congress must act to bring permanent protections, rooted in compassion, to bring us together. We need federal policy that treats immigrants with dignity and respect.”