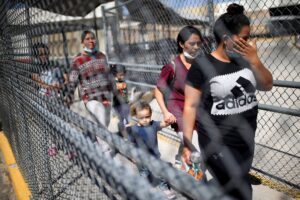 Lawyers of asylum-seekers say people still could be deported even though they are fleeing violence and domestic abuse.

Attorneys for asylum-seekers are urging the Biden administration to stop denying asylum to people under Trump policies that severely limited eligibility on the basis of fear of gang and domestic violence or family ties.

Even though President Joe Biden has ordered a review of the policies, a group of attorneys have asked Attorney General Merrick Garland in an April 13 letter to dump the restrictive decisions by his two immediate predecessors, Jeff Sessions and William Barr.

In separate decisions, Sessions and Barr used unique authority granted them to assign cases to themselves and reverse immigration court decisions.

Their decisions essentially made it impossible for people to gain asylum on claims that they were fleeing domestic violence, had been targeted by gangs or that members of their family were persecuted and so they were also in danger.

Bradley Jenkins, the federal litigation attorney at the Catholic Legal Immigration Network, said the Session and Barr decisions are “so questionable” that asylum denials should not be based on them.

Biden’s executive order mandating a review of former President Donald Trump’s asylum policies sets an Aug. 1 deadline for the review and an Oct. 31 deadline for creating regulations and putting them in effect.

“A bunch of people are going to be deported in the meantime,” Jenkins said.

Jenkins, a signatory to the letter, was lead attorney in a case known as Matter of L-E-A, in which a Mexican citizen requested U.S. asylum, arguing family ties put him at risk of harm from a Mexican cartel.

The man was denied asylum, which Barr agreed with, but Barr reversed a Board of Immigration Appeals ruling that family membership could be considered a social group under asylum law.

People seeking asylum must show a well-founded fear of persecution based on race, religion, nationality, political opinion or membership in a particular social group. Many Central Americans have won asylum through the social group category.