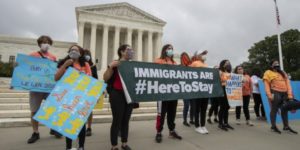 But the ruling still leaves those who were brought to the United States as children with a staggering amount of uncertainty.

DACA is a temporary solution, what activists have called a Band-Aid on a broken immigration system that leaves no clear pathway to citizenship.

More than 20,000 DACA recipients live in Georgia as of March 2020, with 15,000 in the metro Atlanta area, according to U.S. Citizenship and Immigration Services (USCIS) data. Based on estimates from the Migration Policy Institute, the number of people who could qualify for DACA statewide, citing criteria outlined at the program’s launch in 2012, is more than double that, at 44,000.

Aixa Pascual, managing director of advocacy for the nonprofit Atlanta Latin American Association, said those who are trying to offer sound advice to immigrant communities also have many unanswered questions.

Since 2017, USCIS was not accepting new applications. In light of the ruling, federal officials should start to accept those applying to DACA for the first time, and advance parole applications from DACA recipients. But Pascual told “Morning Edition” host Lisa Rayam that the Trump administration could still try to act against the ruling.

“I think it’s a decision that we were not expecting, it’s a very positive decision,” Pascual said.

“We still need to have some caution. What we really need is comprehensive immigration reform that would include a permanent solution for the DACA recipients.”

A temporary victory for immigrant communities and civil rights activists, the fate of DACA has been in limbo since Trump took office and made rescinding the program a major focus of his campaign.