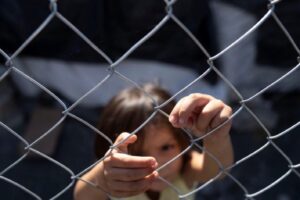 The US reopened its borders this week to non-essential travellers, but most asylum seekers continue to be turned away.

The 38-year-old travelled 2,500km (1,500 miles) to the edge of the country, where she, her husband, two young children, and other family members have been waiting for a chance to claim asylum in the United States.

Now that the US-Mexico border has reopened, she says she has hope of being let through.

“We came to get away from organised crime, not because we are criminals,” Maria, who requested to withhold her real name, told the AFP news agency this week from a makeshift camp in the Mexican city of Tijuana.

Maria – who says her family was threatened after her eldest son was recruited into a criminal gang last year – is part of a record wave of Central and South Americans who journeyed north towards the US over the last year.

Makeshift camps house hundreds along the US-Mexico border, where US authorities this fiscal year detained a record-high 1.7 million migrants trying to enter the country.

The migrants say they were forced to flee their homelands amid chronic unemployment, gang violence, economic crises worsened by the pandemic, and the devastation wrought by recent storms, among other factors.

The arrivals have heaped pressure on the administration of US President Joe Biden, who had promised to take a more humane approach to immigration than his predecessor, Donald Trump, and to reverse some of Trump’s most hardline policies.

But Biden, who took office in January, has maintained a Trump-era policy that allows the US to expel most asylum seekers who arrive at the southern border back to Mexico or to their countries of origin.