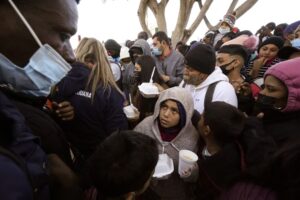 CIUDAD JUÁREZ, Mexico — Angelina Baltazar, stranded here since August 2019 while waiting for her asylum case to move forward, was fiddling with her smartphone, having little success in registering online to cross the border to wait instead on the U.S. side with her family.
“I need to ask someone for help,” said an exasperated Baltazar, 40, a native of Guatemala who lived for more than a decade in Los Angeles — and is now keen to get back there and be reunited with her three U.S.-born children.

“I’m afraid of being left out,” said Baltazar, standing on the grounds of a shelter in this border city across the Rio Grande from El Paso. “If I don’t get enrolled, they’ll just ignore me.”

A sense of hope, combined with renewed anxiety, has emerged for Baltazar and tens of thousands of other migrants — mostly Central Americans but including Cubans, Venezuelans and others — who have been forced to wait in Mexico under a Trump administration doctrine as their political asylum cases proceed through U.S. immigration courts. Some have been in the queue for more than a year as the pandemic has pushed back court dates.

Most have been marooned in dangerous border towns under former President Trump’s “Remain in Mexico” initiative, formally known as the Migrant Protection Protocols.

Launched more than two years ago, MPP was a signature effort in Trump’s campaign to clamp down on immigration by compelling most to wait in tenuous living conditions as their cases proceeded. Previously, migrants who claimed persecution at home and were seeking legal refuge under U.S. and international law were allowed to remain in the United States as their court cases proceeded.

The Biden administration has now stopped adding new enrollees to MPP, and unveiled a plan to work through a backlog of some 25,000 people with active petitions in U.S. immigration courts. The complex guidelines involve online registration and COVID-19 tests for those eventually allowed to pursue cases in the United States.