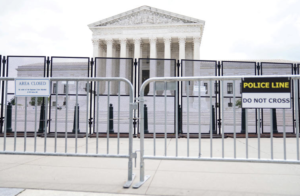 WASHINGTON (Reuters) – The U.S. Supreme Court is set on Thursday to issue its final two rulings of its current term, one on federal agency power to tackle climate change and the other on President Joe Biden’s ability to end a hardline immigration policy begun under his predecessor Donald Trump.

Thursday also will mark liberal Justice Stephen Breyer’s last day as a member of the top U.S. judicial body. Breyer, who announced in January plans to retire after serving since 1994, will officially step down and his replacement, Biden’s appointee Ketanji Brown Jackson, will be sworn in at noon (1600 GMT), the court said.

The justices also are expected to announce possible new cases they will hear in their next term that begins in October. It has been a momentous term powered by the court’s increasingly assertive 6-3 conservative majority, as exemplified by last week’s rulings overturning the 1973 Roe v. Wade landmark that legalized abortion nationwide and expanding gun rights.

In Feb. 28 oral arguments in the climate case, the conservative justices appeared skeptical of the federal government’s authority to issue sweeping regulations to reduce carbon emissions from power plants in a case that could undermine Biden’s plans to tackle climate change.

A ruling restricting the EPA’s authority could hamstring the administration’s ability to curb the power sector’s emissions – representing about a quarter of U.S. greenhouse gases. The United States, behind only China in greenhouse gas emissions, is a pivotal player in efforts to combat climate change globally.

The court on April 26 heard arguments in a legal fight over Biden’s bid to rescind Trump’s “remain in Mexico” policy that forced tens of thousands of migrants to stay in Mexico to await U.S. hearings on their asylum claims.