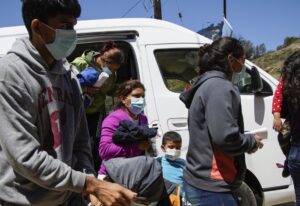 The Biden administration has flown roughly 2,000 asylum seekers — all families with children — from Texas to San Diego and expelled them from the United States to Mexico without giving them a chance to request protection.

Tijuana has been receiving on average about 100 expelled people a day from the flights, according to the Mexican Consulate in San Diego. Mexican immigration officials generally transport the families to migrant shelters. The primary shelter is currently filled with hundreds of parents and children.

The flights, which have not received much attention since they started in mid-March, mirror strategies used by President Biden’s predecessor, former President Trump, to try to deter people from coming by putting those who do come in difficult situations in Mexico.

Biden criticized Trump’s “Remain in Mexico” program that required asylum seekers to wait in border cities like Tijuana while their cases were heard in U.S. immigration court, and his administration has actively worked to wind it down. Asylum seekers in the program reported being kidnapped and assaulted while waiting in northern Mexico, where migrants are often seen as vulnerable targets for cartels and other criminal organizations.

But the expulsion policy, which began under Trump during the pandemic and is known widely as Title 42, puts Central American asylum seekers in the same places that Remain in Mexico did, though without any access to request protection in the United States. There are no court hearings and no official steps that expelled migrants can take to begin the asylum screening process.

Both the Trump and the Biden administrations have said the Title 42 expulsions are necessary to minimize the amount of time that people spend in Border Patrol holding cells during the pandemic.