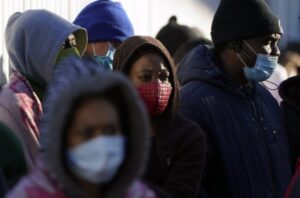 MEXICO CITY (AP) — In the first five days since the administration of U.S. President Joe Biden began to process the thousands of asylum seekers waiting in Mexico, the United Nations High Commissioner for Refugees registered 12,000 people. That’s nearly half the 25,000 active cases the U.S. government has cited.

Migrants who have waited in Mexico and elsewhere to get hearings on their U.S. asylum requests are dealing now with a mix of hope and frustration, along with overloaded websites and telephone lines that never stop ringing.

The hurdles are far better than the seemingly endless wait often in wretched conditions of tens of thousands of asylum seekers forced to choose between waiting in Mexico — or returning to Central America — under the Migrant Protection Protocols, or Remain in Mexico program. Instituted by the Trump administration in January 2019, the program sought to discourage asylum seekers by making them wait in Mexico rather than releasing them with orders to appear for future court dates in the U.S.

On Wednesday, the U.S. Department of Homeland Security announced it would begin processing asylum seekers with registered cases who have been living in a tent encampment on the banks of the Rio Grande in Matamoros, Mexico. Life in the camp has always been precarious, but it was especially hard hit by frigid winter weather that hit Texas and northern Mexico last week. Processing residents of the camp is a priority for the Biden administration, the statement said.

Last week, the U.S. government began processing a small number of asylum seekers with active cases in San Diego. The processing is expected to expand to El Paso soon.

According to preliminary data shared by UNHCR, of the 12,000 people who have registered, some 4,000 are children or dependents and about 1,200 registered from outside Mexico.

Some of that last group registered from the United States, suggesting that they may have entered the country illegally after making their initial asylum petition. The others registered from Central America where they returned to their native countries rather than remain in the often dangerous Mexican cities at the border.