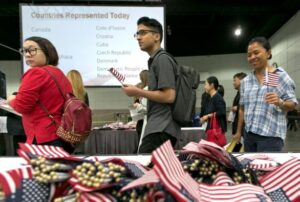 WASHINGTON – U.S. legal permanent residents on the path to naturalization will now be required to take a longer and more complex citizenship test.

The new civics test is drawn from 128 questions test takers must be prepared to answer about American history and government, up from 100 questions previously. Anyone who applies for U.S. naturalization after December 1, 2020, must take the new version.

U.S. Citizenship and Immigration Services (USCIS), a federal agency under the U.S. Department of Homeland Security (DHS) that administers the country’s naturalization and immigration system, announced in 2019 it was improving the naturalization civics test for the first time since 2008. It made the move official last week.

“Updating, maintaining, and improving a test that is current and relevant is our responsibility as an agency in order to help potential new citizens fully understand the meaning of U.S. citizenship and the values that unite all Americans,” Ken Cuccinelli, who was then serving as USCIS acting director, said in a statement.

Applicants must answer 12 out of 20 questions correctly to pass instead of the previous six out of 10.

“But you are asked all 20 questions,” said Nancy Newton, program director of the Citizen Preparation Program at Montgomery College, a public community college in Montgomery County, Maryland.

Newton told VOA the new test will require greater English proficiency, shifting from a high-beginning level of English to a high-intermediate level.