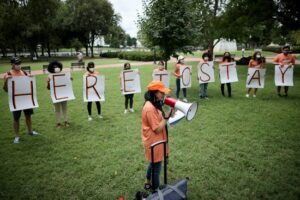 Politico reports that Senate parliamentarian Elizabeth MacDonough, who is an employee of the chamber, will this Friday hear “dueling arguments” over the inclusion of immigration provisions in Democrats’ $3.5 trillion spending package. Those provisions would create a pathway to citizenship for young undocumented immigrants, temporary status holders, and essential laborers like farmworkers.

Democrats will argue that there is precedent for passing these provisions through the budget reconciliation process (and there is). Senate Republicans will oppose it, because they’re Senate Republicans. Beltway reporting has framed MacDonough’s opinion as a final ruling, the last word, do not pass go, do not collect a pathway to citizenship. But as Daily Kos’ Joan McCarter has previously written, it’s an opinion Senate Democrats are free to reject. It’s really all up to them.

Leading into this Friday’s meeting, policy experts and advocates have already publicly made the case for passing immigration provisions through the budget reconciliation process. “In 2005, the Republican-controlled Senate overwhelmingly passed a version of what ultimately became the Deficit Reduction Act through reconciliation, containing several relevant immigration provisions,” the Center for American Progress (CAP) acting Vice President of Immigration Phil Wolgin wrote in July.

2005 would mean that the presidency and both chambers of Congress were under Republican control at the time. In fact, Emerson Collective Managing Director of Immigration Marshall Fitz wrote last month that “[s]everal of the senators currently claiming this effort is impermissible” supported that effort. Their names? Mitch McConnell and John Cornyn. “That legislation would have significantly increased the number of green cards available each year, making an additional 3.24 million people eligible for permanent residence over a decade, precisely the type of policy being proposed by Democrats today,” Fitz continued.

Senators are making their case to MacDonough as dozens of economists have added their names to a letter to Democratic leaders in support of passing these immigration provisions through reconciliation, “arguing that it would bolster the US economy,” CNN reported.