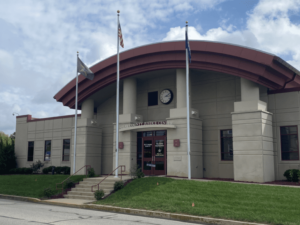 BRAZIL, Ind. — Clay County is a lot like the other counties around it: rural, overwhelmingly white, lower middle class, and very Republican. But one thing that sets the county apart is its local jail, which is the only jail in Indiana that holds immigrants and asylum-seekers in U.S. Immigration and Customs Enforcement custody.

As officials in nearby Illinois prepare to shutter the state’s two remaining immigration detention centers, Clay County is moving forward on a proposal that could more than double the capacity of the jail — paid for in large part by taking in more ICE detainees, local elected officials said.

The county entered into an agreement last month with a local developer on a proposal that would add a new 45,000-square-foot housing pod with at least 265 beds to the Clay County Justice Center. The county commission has not yet fully signed off on the expansion, which could cost upward of $25 million, according to the developer’s proposal.

The move to expand the Clay County Jail highlights the potential pitfalls when immigration activists in liberal states score big victories — such as the law signed by Illinois Gov. J.B. Pritzker in August that is set to end local jail contracts with ICE in the state starting Jan. 1. That will make the Clay County Jail the only immigration detention center between Wisconsin and Kentucky.

An ICE spokesperson did not respond to questions about where detainees currently being held in Illinois will be moved once the law goes into effect, but local immigration experts said it’s likely they’ll be moved to jails in neighboring states.

“The long and short of it is that people from Illinois will be held at this expanded jail in Indiana, particularly if and when the jail contracts with ICE here in Illinois shut down,” said Fred Tsao, senior policy counsel for the Illinois Coalition for Immigrant and Refugee Rights.