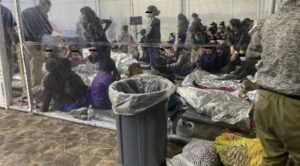 Immigration authorities announced Tuesday that arrests along the southern border ticked up in April but the number of unaccompanied minors arriving at the border declined.

Data from U.S. Customs and Border Protection (CBP) published Tuesday showed that there were 178,622 arrests and detentions at the border last month, marking the highest one-month total in 20 years. However, April also marked the first month during the Biden administration that did not see a significant spike in illegal border crossings from the previous month, with April’s figures marking just a 3 percent rise from March.

The number of unaccompanied minors also dropped to 13,962 in April from 15,918 in March, a decrease of about 9 percent.

“CBP continues to see a large influx of illegal migration along the Southwest Border,” said CBP Senior Official Performing the Duties of the Commissioner Troy Miller.

“In order to disrupt criminal organizations that have little regard for human life, CBP is leading the way alongside external law enforcement partners through Operational Sentinel. Day after day, CBP rescues migrants abandoned in harsh terrain, left for dead with no food or water. CBP is committed to enhancing the security of the U.S. border and helping save the lives of vulnerable migrants,” Miller said.

The April figures likely mark a welcome sign for the Biden administration, which faced an avalanche of criticism earlier this year over a surge in border crossings and large amounts of minors in government custody.

The administration has pressed Mexican authorities to adopt stricter enforcement measures to prevent Central American migrants from making their way to the U.S. border and opened several emergency shelters to ease the burden on existing sites housing minors following criticism of poor conditions at the centers.

By Tal Axelrod for THE HILL
Read Full Article HERE