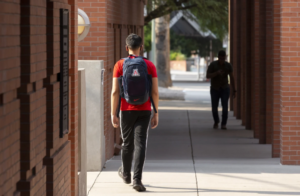 Voters in Arizona have approved a ballot initiative to extend in-state college tuition to qualifying students regardless of immigration status, the Associated Press has reported.

Proposition 308 will allow students, including those who are undocumented, to pay in-state college rates if they’ve attended Arizona high schools for at least two years.

More than 3,600 undocumented Arizona students could benefit from the measure annually, according to research by the American Immigration Council, a nonprofit immigrant advocacy group based in Washington, D.C.

Hazel Villatoro, 17, is originally from Chiapas, Mexico. She has been living in Arizona virtually her whole life — since she was a 1-year-old. After graduating high school in three years, she wanted to attend Arizona State University, but she said she would have had to pay three times more to attend than her sister, who pays in-state tuition because she’s a legal resident.

“I’m not asking for anybody to pay for my tuition. I just want a fair opportunity as my fellow Arizona students,” said Villatoro, who is now a freshman attending Grand Canyon University on a full-ride private scholarship and majoring in biology to become an anesthesiologist.

“I just want to give back to the community and pursue the career that I want,” Villatoro told NBC News.

Currently, hundreds of college students who don’t have legal status are paying a non-resident rate that is 150% more than in-state costs, according to the Associated Press.

In-state tuition access could help increase undocumented students’ earnings and spending power by tens of millions of dollars annually, as they would go on to obtain college degrees, according to the American Immigration Council, which could also help raise an additional $4.9 million per year in federal income taxes and state and local taxes.

Proposition 308 will also make qualifying students eligible to qualify for state-funded aid, including scholarships and grants.