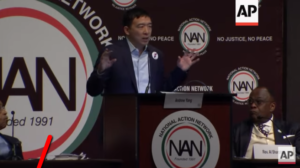 Democratic presidential candidate Andrew Yang likes to joke that Americans are ready for “an Asian man who likes math.” While the math underlying his call for universal basic income has been scrutinized, his trumpet blares regarding the dangers of automation are not receiving nearly the attention they should be.

At least part of the reason is the continual drowning out of all serious issues due to racial profiling (or whatever other target the president invents that day). On the debate stage, Yang stated that immigrants are being scapegoated for reasons separate from economic issues. Though obvious to most, politics around racism has always relied on linguistic feats, as if “go back to your country” could be anything other than blatant bigotry.

Yang intimately knows of what he speaks. His immigrant parents traveled from Taiwan to Berkeley to attain impressive degrees: his father a Ph.D. in physics, his mother a master’s in statistics. Yang put this into perspective:

“My father immigrated here as a graduate student and generated over 65 U.S. patents for G.E. and IBM. I think that’s a pretty good deal for the United States. That’s the immigration story we need to be telling. We can’t always be focusing on some of the distressed stories.”

As an entrepreneur, the Brown and Columbia graduate went on to found Venture for America, which focuses on creating jobs in depressed American cities. Yang left in 2017 after growing the company to twenty cities with a $6 million operating budget. He has since focused his career on warning anyone who will listen about the dangers of automation on our work force. Fortunately, he has landed on one of the biggest platforms to do so.