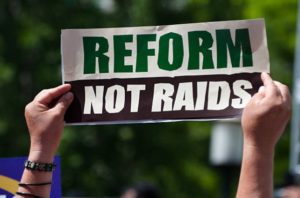 The Trump administration has, once again, played a “Now–You-See-It-Now-You-Don’t” political maneuver extinguishing any hopes for achieving meaningful immigration reform this year. This week, Mr. Trump stated that DACA (Differed Action for Childhood Arrivals) “is dead”; reversing his position of just weeks ago, seemingly wanting to protect this group of 2 million young immigrants from deportation. He incredulously blames Democrats for not “acting”, seemingly forgetting not only that his Republican party controls Congress but that he caused the current crises by rescinding the DACA program last fall.

In addition, while the President touts that we are a “country of laws”, he simultaneously describes the immigration legal system as “one big wasted procedure.” In an effort to further control such “wasted procedures,” the Justice Department just announced the implementation of quotas on the cases reviewed by immigration judges. This, in blatant violation of the very heart of American doctrine of equity and justice: due process.

America, in its soul, craves for a more cohesive, strong-functioning and united union. Yet, this nativist administration is refueling its divide and conquer stratagem, implementing propaganda tactics that identify immigrants as “un-American” and weakens institutions that strengthen communities. One prime example is the addition of an immigration status question to the 2020 Census. Thus, risking inaccurate population counts and threatening Federal funding to qualified parts of our nation where there are large immigrant populations.

Ultimately, Mr. Trump’s base supporters are mad that there are still immigrants in America… This is not a joke. This is not funny. Let’s tell Trump and his supporters that in November.