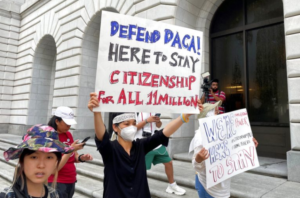 Attorneys hoping to save an Obama-era program that prevents the deportation of thousands of people brought into the U.S. as children told a federal appeals court Wednesday that ending the program would cruelly disrupt the lives of thousands who have grown up to become tax-paying, productive drivers of the U.S. economy.

An attorney for the state of Texas, leading an effort to end the Deferred Action for Childhood arrivals program, argued that DACA recipients have cost the state hundreds of millions in health care and other costs.

The dueling views at the 5th U.S. Circuit Court of Appeals in New Orleans were exchanged as more than 100 DACA supporters held signs, beat drums and chanted outside of the courthouse. They called for preservation of the program that protects more than 600,000 people from deportation, and a path to citizenship for immigrants.

“I am undocumented, and I will speak out today,” said Woojung “Diana” Park, 22, of New York. She said she was brought to the U.S. as a 1-year-old from South Korea. DACA, she said, “is the bare minimum that the U.S. government has offered immigrant communities after decades of fighting for basic human rights.”

A federal judge in Texas last year declared DACA illegal — although he agreed to leave the program intact for those already benefiting from it while his order is appealed.

The U.S. Justice Department defended the program, allied with the state of New Jersey, advocacy organizations such as the Mexican-American Legal Defense and Education Fund and a coalition of dozens of powerful corporations — including Amazon, Apple, Google and Microsoft — which argue that DACA recipients are “employees, consumers and job creators.”

Texas, joined by eight other Republican-leaning states, argues that DACA was enacted without going through proper legal and administrative procedures, including public notice and comment periods. Additionally, the states argue that they are harmed financially by allowing immigrants to remain in the country illegally.