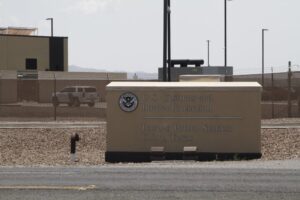 WASHINGTON (AP) — More Americans disapprove than approve of how President Joe Biden is handling the sharply increasing number of unaccompanied migrant children arriving at the U.S.-Mexico border, and approval of his efforts on larger immigration policy falls short of other top issues — suggesting it could be a weak point for the new administration.

A new poll by The Associated Press-NORC Center for Public Affairs Research also shows that solving the problem of young people at the border is among Americans’ highest immigration priorities: 59% say providing safe treatment of unaccompanied children when they are apprehended should be a high priority, and 65% say the same about reuniting families separated at the border.

Former President Donald Trump built his presidency around hard-line policies that expanded and fortified border walls, made it tougher for people fleeing drug violence and other desperate circumstances in Mexico and Central America to seek U.S. asylum and separated immigrant families.

Biden has tried to seize political momentum on the issue by promising a more humane and orderly system, but his administration has struggled to cope with rising numbers of migrants coming to the border, especially unaccompanied children.

Overall, 40% of Americans disapprove of Biden’s handling of children reaching the nation’s southern border without their parents, compared with just 24% who approve. Thirty-five percent don’t have an opinion either way.

“I don’t know how to politically correctly say this: I do feel that, because there’s this new administration, that people feel that they can come to the country,” said Mindy Kiehl, a 40-year-old real estate agent in Erie, Pennsylvania, who otherwise approves of Biden’s handling of the presidency so far.